Yoga as Therapy: A Treatment Plan for Carpal Tunnel Syndrome and Osteoarthritis

12 Dec Yoga as Therapy: A Treatment Plan for Carpal Tunnel Syndrome and Osteoarthritis

Posted at 13:21h in Articles by Kelli Russell 0 Comments

Many yoga students have injuries and physical ailments.

Some are drawn to yoga as a form of therapy for their physical suffering, while others attend yoga despite their injuries, aches and pains. When I consider the curative effects of yoga, I’m reminded of Bikram Choudhury, world renowned master yogi, who at the age of 13, won the National India Yoga Championship and maintained the title for the three years following. At 17-years-old, he suffered a severe knee injury during weight lifting; European doctors said he would never walk again. Not accepting their prognosis, Bikram had his friends carry him back to his yoga school, believing that if anyone could help his knee it was his teacher. Six months later, his knee had healed. Bikram’s teacher, Bishnu Ghosh was the first to scientifically document yoga’s curative properties.

Several decades later, Marian Garfinkel, director of the B.K.S. Iyengar Yoga Studio of Philadelphia, and a team of researchers studied the benefits of yoga in treating two rheumatic diseases: Carpal Tunnel Syndrome and Osteoarthritis of the hands. The researchers determined that the yoga programs used in the studies were effective in relieving negative symptoms of both diseases. The Iyengar yoga approach was utilized in the studies, chosen for its emphasis on proper body alignment and focus on adjusting yoga postures to meet the physical conditions of the subjects.

In the first study, Evaluation of a yoga-based regimen for the treatment of Osteoarthritis of the hands (Garfinkel, M.S. et al., 1994), subjects were divided into a control group, and a group in which participants worked with a yoga instructor once a week for eight weeks. The yoga group focused on stretching, strengthening, alignment and extension. In addition to the physical poses, the yoga group included relaxation techniques, group discussions and supportive encouragement. At the end of the eight weeks, the yoga treated group reported significantly less pain and tenderness during activity and greater range of motion.

The second study, Yoga-based intervention for carpal tunnel syndrome, (Garfinkel, M.S. et al, 1998), a control group received a wrist splint, while the yoga treated group received a program based on upper body postures focused on improving flexibility, correcting the alignment of hands, wrists, arms and shoulders, and increasing the awareness of proper joint position during practice. The yoga group practiced twice a week for eight weeks. Eleven asanas were used, each designed to strengthen, stretch and balance each joint, utilizing full range of motion. Results of the study showed that the yoga group significantly improved grip strength and reported pain reduction compared to the control group. Researchers concluded that yoga was more effective than wrist splinting or no treatment in relieving carpal tunnel syndrome symptoms.

Here are the eleven asanas that Garfinkel and her researchers used to treat Carpal Tunnel Syndrome in the study:

Yoga therapy has not yet proven to be a replacement for traditional medical treatment of rheumatic diseases and repetitive strain injuries, but it has demonstrated an opportunity to reduce pain and improve symptoms. In order to receive the therapeutic effects of yoga, however, it is imperative to complete each asana with proper alignment, under the guidance and supervision of a registered yoga instructor. 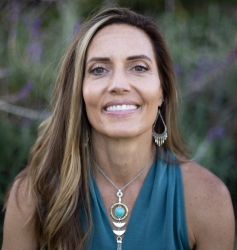 In addition to yoga and meditation instruction, Kelli is an applied kinesiology practitioner -here to help you release emotional stress and trauma, balance your energetic system, and establish powerful subconscious beliefs that support everything you do. Learn more and book your session at innermostsherpa.com